A Pepsi advertisement featured Kendall Jenner leading a Black Lives Matter protest with generic messages written on posters and eventually handed a Pepsi can of soda pop to a police officer. Pepsi said in a statement that they were “trying to project a global message of unity, peace, and understanding. Clearly, we missed the mark and apologize.”

The message didn’t just miss the mark, it completely backfired, as social media went on a ranting frenzy. The spot was ridiculed on social media, parodied on SNL, and quickly pulled. Pepsi seemed to keep the message generic in an effort to not support a specific cause because maybe they thought it would alienate a different cause.

Six months later after the campaign, PepsiCo president Brad Jakeman stepped down, telling media the spot was “the most gut-wrenching experience of my career.”

Let’s take a trip through time, shall we? In 1992, the Hoover Company launched a marketing campaign in Great Britain that offered a free ticket to anyone who purchased products worth $100. But the only problem was that the free prize was worth more than the value of the product purchased. 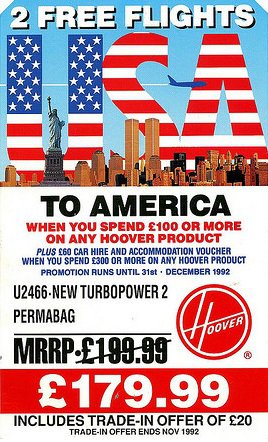 People flocked in to purchase goods, and the free tickets kept flowing causing a $50 million loss for Hoover. Needless to say, it was difficult for a company to survive after such heavy losses.

No Insurance Day Campaign Of Policybazaar.com